I’M BACK! After a long hiatus of not blogging, but being busy with literally everything else, I finally bring myself to write- and it’s 2019! My first review of 2019 is going to come from good ol’ Huda Beauty. I received the ‘New Nude’ eyeshadow palette from my boyfriend for Christmas, and I haven’t been able to put it down since! I’ll also be reviewing the ‘Melted Metal Shadows’ which were released just before the new year.

Let’s talk about the New Nude palette first. This 18-pan palette contains 10 matte shades, 4 duochrome metallic shades, 2 glitter formulas, 1 pure metallic shade and one concealer base. What I like about the colour selection for this palette is that there are a lot of wearable cool tones, which is much needed after a year of many warm-toned palettes. I also like that these shades look very sophisticated and soft when paired together, and could definitely be worn as an everyday look without having to use the same typical brown shades.

Overall, I really like all of the shades but I haven’t used the glitters yet. The mattes are really blendable (like all of Huda’s mattes) and the ‘duochromes’ are really reflective (but not that duochrome).

Now onto the Melted Shadows. Huda released 5 double-ended liquid shadows, that have a matte formula on one side and a sparkly metallic on the other end.

I bought two shadows, one in the ‘Bubblebath/Pink Champagne’ duo and one in the ‘Silk Bomber/Bubblegum’ duo. These melted shadows are supposed to be waterproof and smudge proof for 12 hours, and I saw on Instagram that Huda wet her arm to prove that.

I decided to try this myself. I wet my arm and it looked like the shadows had stayed put, but lo and behold, when I rubbed my finger across, the metallic ones smudged really badly! Impressively, the matte ones stayed put. To be honest, I don’t see the use of waterproof shadows (unless you’re going swimming?) so it didn’t really bother me, but still seems like false advertising.

This is an unedited photo of my attempt at using the melted shadows. I saw on Instagram that influencers would dot the matte shadow and blend it into the crease using a brush, so that’s what I did. I found it took a bit of effort to blend it well using a natural bristle brush, so I used a synthetic fibre brush instead which worked way better.

I was really hoping to like this product, but I have many issues with the metallic formula. Firstly, the brush for the metallic end is similar to that of a lipgloss brush, which i don’t get, especially since the matte end has a nice flat doe-foot applicator. Because of that, the metallic formula goes on streaky, which is a no-no in my book.

Secondly, the metallic formula is really crumbly when it dries, as well as not being that pigmented. I had such a hard time putting eyeliner on over it because I had to put so many layers to build up the pigmentation, and it became such a mess.

This is the finished product. Overall, it turned out a little better than the first attempt, but I still don’t like the crumbly look of the metallic formula. I feel that if you want a good liquid eyeshadow try the Stila Magnificent Metal eyeshadows or the ColourPop Supernova Shadows. As for the palette, I think it might be my favourite Huda Beauty eyeshadow palette so far! I just really like the soft tones of the shadows, and how wearable the colours are without being boring. 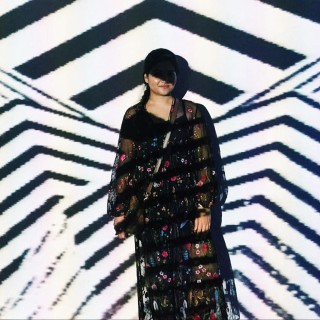